After months of watching teaser after teaser for “Dear White People,” the national release day is upon us! Though you might not know exactly what the film is about you already know you want to see it and you want to see it right now! On top of the multitude of reasons you’ve already compiled in your mind about why you need to see this film,  actor Nia Jervier tells us why “Dear White People” has to be at the top of your viewing list this weekend.

Ms. Jervier chatted with  us about her role in the film, why the film is important and the exciting upcoming project she’s starring in, “Ladylike.” Her leading role in “Ladylike” was written specifically for the ever-lovely and ever-stylish actor. This marks the second role that has been created with Ms. Jervier in mind after her role as Nia in”Twenties.” It serves as a testament to Jervier’s infectious and warm personality that multiple, unique and memorable characters have been inspired by and created for her.

[speaking of her role in “Ladylike”]

NJ: it was written for me. I’m like 2 for 2 right? The ViP: I know! Just inspiring people left and right. NJ: I love that! Hopefully it like turns into something amazing for me. The ViP: I’m sure it will.

The ViP: INTRODUCE US TO YOUR CHARACTER IN DEAR WHITE PEOPLE

NJ: Okay, so I would say I’m Coco’s best friend, but like her minion and I basically do as I’m told.

The ViP: What makes you say that? Why did you pick minion as opposed to, like, confidant?

NJ: Because I don’t know if Coco is secure enough in herself to have friendships with people who are her equal. So I think that it makes her feel better probably to know that that person’s like slightly beneath. I don’t know, never thought about it that way.

The ViP: No, it’s interesting because we don’t hear a lot from your character-

NJ: You hear nothing.

The ViP: Right, but clearly there’s a story and a background to it or to that person being there.

NJ: And also as an actor, you have to put that work together too, you know what I mean?

NJ: You just have to give actor thoughts. I think it’s more difficult sometimes but because I love this film and what it’s about I have like love invested in the relationship with Justin, as a friend that loves and adores him and the other producers, like Lena and Angel, and all those people. I would’ve gone there and I would’ve held a light, I would’ve held a fan, I would’ve done craft services. I just wanted to be there and support my friend in this amazing film that they were producing, this amazing artistic project that they had been working on that I believe in and that I believe will change cinema.

The ViP: WHAT’S YOUR CHARACTER’S MAJOR AND FAVORITE ALBUM?

NJ: Oh my god, never thought of this. My god what would it be? This is a very good question, have you asked anybody else this? I feel like Courtney knew right away.

The ViP: They asked Ashley, I don’t know if they’ve interviewed Courtney yet.

The ViP: I feel like that’s even harder than the major.

NJ: I know, The Beyoncé album.

The ViP: There ya go!

NJ: I don’t think that was out when we shot this.

The ViP: Probably not

NJ: It came out in January so yeah it was out-

The ViP: It came out last December.

NJ: Oh it wasn’t out when we shot. What else is in that genre? I feel like it would be something really trendy, not something smart and offbeat. I like The Weekend but it’s not gonna be that.

The ViP: Like Sam Smith. Basically if it were right now it would be Sam Smith because Sam Smith is what’s popping.

NJ: A huge deal. Maybe it is Rihanna. What else were we listening to? We were listening to so much while we were there so it’s really hard. I would say the Beyonce album or Rihanna even though it should be when we shot it.

The ViP: Whatever, we make the rules. 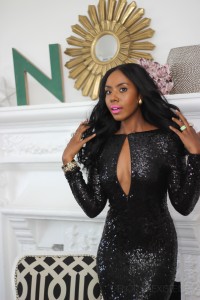 The ViP: WHAT’S ONE THING YOU LEARNED BY BEING A PART OF “DEAR WHITE PEOPLE?”

NJ: The main thing I learned is that you should listen to your inner voice no matter what. Stick to what you know your purpose is and push for something that you believe in because you know if Justin were not certain and connected to his inner voice he would’ve been like, he wouldn’t have been strong enough to make this happen but because he was and he really believed in it and he knew what his truth [was] I think that he didn’t allow anyone to change what he’d written. He believed in it. He was fully immersed in the world that all these characters live in and believed and knew that people would identify with these characters and the stories even when other people didn’t believe it. So, I just really admire that about him and that was the biggest lesson for me is believing something in your heart, setting your mind to it, having faith and setting a goal and having the confidence that it will come to fruition.

The ViP: WHAT DO YOU HOPE FOR DEAR WHITE PEOPLE?

NJ: I’m so confident that it’s gonna have a huge impact. This story that Justin is telling is truthful. It is one that people need to hear about often. I think it’s gonna change lives and open people’s minds. I know that it’s going to be sold out everywhere. I just picture, like, it being sold out everywhere and talked about everywhere. I feel like if I turn on the radio and listen to the television, I mean turn on the radio and watch the television or log on to any of my social media outlets that I will just be inundated with things about this film. I am a 100% certain, and I think it’s going to shake people socially and in a good way. I think it’s gonna have a definite positive impact and it will also lead to what our ultimate goal is—a resurgence of more things like this that make people think and breathe deeper and have educated opinions on things and maybe embrace other cultures and question things about their own culture. I think socially and politically it’s going to shake things up in a good way. We need a little, I think our society needs a little jouge. It’s time.

The ViP:  HOW DID YOU ALL DECIDE WHICH [PROMO SKETCHES] YOU WANTED TO DO?

NJ: They were chosen for us. Lena and Justin, I think, wrote most of them. I think there may be one other guy who wrote one or two and then [we] were just invited to do [them] based upon what was suited for us as individuals or what characters they needed.

The ViP: WHAT’S NEXT FOR YOU?

NJ: What is next for me? Um Ladylike, I have a very, very, very good feeling about this project. It’s avant-garde, different. It’s very smart and stylish and dark and I’ve really never seen anything like it. So I’m very honored that Tiffany asked me, I think she’s brilliant and excited because Lena is one of the producers.

Lena knows what she’s talking about. Whatever Lena tells me I listen. I know she loves me and has my best interest at heart and she has a good eye. She knows when something is good. I sorta feel like, it comes back to trusting your gut, knowing…it’s the kinda thing to know that if you like something other people will like too. I know people think about DWP, oh there aren’t many black people like that, there are no black militant sisters like Sam White and that’s not true.

By them believing that all of that, people would still receive it well and identify with it to fight those cultural stereotypes. I think that Lena is a tastemaker. She knows what she’s doing. I feel like the fact that she co-signed it and believed in it I know that it will grow and that what Tiffany has created is amazing. I don’t even have anything to compare it to.

The ViP: IT LOOKS VISUALLY STUNNING AND I HAVE NO IDEA WHAT IT’S ABOUT

NJ: You have no idea what it’s about. That‘s exactly what she wants to do. She doesn’t want anyone to know anything.

If that’s not enough to convince you that Dear White People is worth your time, I don’t know what is. Made with love and a commitment to truth, the film’s impact reaches far beyond just telling the story of “being a black face in white place.” It is testament to what happens when you follow your dreams and believe in your voice regardless of what the naysayers, the race apologists and the “reverse racism” fanboys have to say. Grab your tickets to what is easily the best film of the year over at dearwhitepeople.com/tickets! 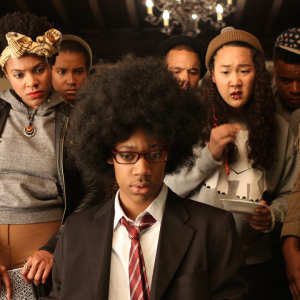