Held up by the reluctance of the Hendrix estate to support the film, the official trailer for the film Jimi: All Is By My Side, directed by John Ridley, has finally been released!

The film premiered at the 2013 Toronto Film Festival and this year’s SXSW Festival. Auspiciously on time, the trailer, released July 3rd, is just ahead of its approaching national release this fall, September 26, 2014.

Because I am a hardcore Andre 3000 fan, as well as a fan of the Oscar winning writer-director John Ridley (screenplay 12 Years a Slave), it’s hard to see the 1:39 minute clip and NOT be immediately inundated with acute satisfaction knowing that a Black writer and director will be responsible for sharing a small but important portion of Hendrix’ life.

Due to the lack of involvement of the Hendrix estate, what would have ultimately been an authentic musical biopic, will instead include covers of Hendrix’ music as well as music that Hendrix covered during the late 60s. Sadly, none of Hendrix’ original music will be used in the final score.

I will definitely be supporting Ridley and team this fall and I encourage you to do the same because: 1. Jimi Hendrix is (perhaps) the greatest instrumentalist, electric guitarist and rock n roll artist of all time, 2. I love Andre Benjamin and 3. It is imperative that active measures are taken to ensure our stories are told authentically. 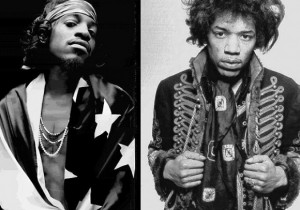 Eerily resembling a 24 year old Hendrix, from appearance and mannerisms down to syntax structure and performance style, Andre 3000, nearing 40, seems to have risen to the occasion in the portrayal of the musical genius.

The feat explores the social and musical environment influencing the professional trajectory of Hendrix in 1966 London before his rise to legendary stardom in the US in 1967 at the Monterey Pop Festival in CA. Viewers can expect both intimate and interpersonal relationships to be explored with special emphases on Hendrix’ relationship with Linda Keith. Inspired by single “Sending My Love to Linda”, Jimi: All Is By My Side allows more than enough room for rock n roll and hip hop fans alike to share in one of music’s most commanding legacies.

Listen to “Send My Love to Linda” here & check back with us for more updates on Ridley’s Jimi: All Is By My Side in theaters this fall!

Tags: All is By My Side, Andre 3000, Artists of Color, Biopic, Jimi Hendrix, Legends, Musicians, Purple Haze

Beyond the Excuse: Wonder Woman and Martha Jones are More Than ‘Strong’ or ‘Weak’

Remember That Time the Emmy’s Got It Right?…Us Neither: We #FixedIt

Beyond the Excuse: Wonder Woman and Martha Jones are More Than ‘Strong’ or ‘Weak’

Strong woman. We love this phrase. It’s everywhere. Ubisoft pointed to “strong female characters” throughout Assassin’s… July 10, 2014
...by TÆLORD•EXISTENCE. © 2016
Back to top