Gun Control. It’s an undying issue that claims and reclaims news headlines with resiliency. The hot button topic of every Presidential election and, unfortunately, a topic we revisit when tragedy strikes innocent shooting victims. Many argue that gun control is necessary, some argue guns shouldn’t be distributed to the public at all, while others argue everyone should have access because it’s our constitutional right.

It is, however, very interesting that many arguments sidestep the turning point of gun control in the mid-twentieth century – The Mulford Act.

The Black Panther Party (BPP), known for their active resistance to white supremacy and capitalist oppression, took the words of Malcolm X to heart when he said our government was, “either unable or unwilling to protect the lives and property” of Black people. Disappointed by unfulfilled promises of the Black Civil Rights Movement, BPP members integrated open carry into their praxis, teaching new recruits that guns would lead to Black liberation. BPP members even monitored Black neighborhoods while armed in response to Anti-Black violence.

The presence of firearms in Black communities induced white panic. Suddenly gun control seemed like a necessary step for public safety, American values, and yadda yadda yadda. Enter The Mulford Act of 1967 – legislation introduced in the state of California to regulate distribution and usage of firearms. Alternatively referred to as “The Panther Law,” The Mulford Act was signed into law by none other than Gov. Ronald Reagan (at this point if you draw a blank on signees of oppressive, Anti-Black legislation, just play the Reagan card – there’s a good chance you’re right). In support of the bill, Gov. Reagan stated there was “no reason why on the street today a citizen should be carrying loaded weapons.” NRA chapters across the country followed suit, introducing and lobbying for legislation to amplify gun control.

Never forget, when the playing field becomes even, cheaters love to yell “time out!”

RECEIPTS: Fear of A Black Gun Owner The NRA Once Supported Gun Control The Mulford Act

I would like to know about the slaughter that happen in Florida in the1920,s30s of black folks thank you.

Never Forget #015: The Excellence and Tragedy of Black Wall Street ‹ The Visibility Project 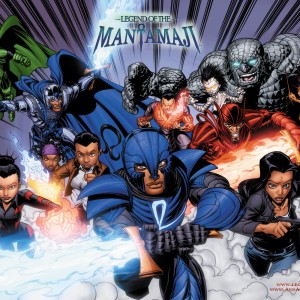 Blerds Rejoice! The Legend of the Mantamaji is here! Mantamaji focuses on the adventures of Elijah Alexander, New York… May 23, 2015
...by TÆLORD•EXISTENCE. © 2018
Back to top