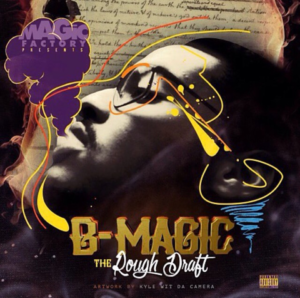 B. Magic is an old soul thriving in the new school.

A driving force in the nationally-recognized Hood Hippies collective, the producer, writer and emcee has begun a journey to musical stardom with mentorship and activism at the helm.

The Delaware native can be considered a son of the South, with ideas and musical influences rooted in his mother’s home state of Mississippi. His parents’ guidance stood firmly in the music he heard at home, ranging from R&B to southern Hip-Hop and 80’s pop.

Calling upon the iconic production styles of Pharrell Williams, old world Kanye, and Will.I.Am., B. Magic’s sound can best be described as “mood music” – you can always tell what moods fueled his creative process, and it’s impossible for listeners to walk away underwhelmed. The ever-curious, multi-talented artist spoke about his return to the South, his work and his vision.

The Visibility Project: I was curious as to how you got the name B. Magic. Where did that come from?

B. Magic: My name is Brandon, [and] I couldn’t just come out as Brandon the producer or anything like that…everybody used to call me B. Like, ‘Hey what’s up B?’ As I started making beats they started calling me B. Magic, and it started sticking with the kind of music that I make. So I just let it stick with me.

The ViP: When did you start making music?

B. Magic: I started making beats when I was about 15, so about 10 years ago. Before that me and my boy came together and started rapping. We were about 10 years old. We had his sister’s little boom box and we used it to record. Our first song was called, ‘Straight Hustlin.’ It didn’t blow up or anything, but around the school everybody knew me and him – the two guys that rapped.

The ViP: Was there something specific that made you want to take it more seriously even at the young age of 10? Did something happen in your life that made you decide that this was something you wanted to do?

B. Magic: At that age it was more about listening to music. I grew up with my [parents] playing a lot of music around the house…my dad always played old school Hip-Hop and stuff. I’ve always had an older soul because they instilled the real music in me. But I didn’t take it seriously until I was about 15.

Shout outs to Delaware, his mother’s Mississippi roots, and his father’s native Brooklyn can all be heard on his most recent release The Rough Draft.

The instrumental to the song ‘Set Up’ has all of the smoothness of a Sade cut coupled with a trap beat. B. Magic warns us about girls who “set up” their men to get money, cars and clothes. He ends the cautionary tale with a skit of him and his girl talking on the phone – a quick serving of nostalgia circa 90s and early 2000s R&B – and a flawless transition to Junior M.A.F.I.A.’s ‘Get Money.’

If the beat on ‘In This Bitch’ puts you on the dance floor with a drink in hand, his flow will ask if you want to step outside where it’s a little quieter so you can really talk. The ease with which he guides his instrumentals  is a rare gift that can be spotted in the catalog of legendary duo OutKast, one of his all-time favorites.

The ViP: Would you say that home is something that still influences your work?

B. Magic: Home definitely influenced a lot – from the way that I talk [to] the way that I move and interact with other people. In Delaware we got different swag, especially in Wilmington. [We’ve] got a lot of different type of slang and how we express ourselves.

I guess I can say…I’ve realized that where I come from its kind of cutthroat. People [are] not as nice as people down South. You don’t realize because you get so used to it. It’s just a totally different vibe coming from Wilmington, DE [going] down to Lake Worth, FL.

His strong convictions – no doubt made bulletproof by his former stomping grounds – are made apparent in his music. On ‘Dead Lion,’ a track released shortly after The Rough Draft, he delivers a diss so direct and unapologetic that you may suffer secondhand embarrassment for one of his former colleagues. To quote Erykah Badu, he reminds any and all who’ve crossed him that this tea and incense can turn into Colt 45 and Newports if need be.

The ViP: What inspired the move to Florida?

B. Magic: I started dealing with this group called the Hood Hippies. They’re an entertainment collective of dope artists from all over the country. My boy Mike Gando was the first [of us] to move down to Florida. He felt like, on the engineering tip, that this would be a good move for my career. Gando invested in a studio, and he told me, ‘Whenever you want we can come together and make a better studio down here.’ They stuck to their word and the next thing you know, a month later I was down here.

The ViP: So the Hood Hippies is an artist collective established throughout the country and you’re primarily doing production with them.

B. Magic: Well I do production [and] I rap. When we all get together there’s a crazy energy. We don’t really sit there and write or anything like that, and we’re not assigned just one role. I’m an engineer and producer, but then other people get to engineer. They see what I’m doing and I show them little tips.

I try to bring certain creative things out of people that I’m around so that we can all add different things to the whole piece. When I meet young producers – anybody that I know that’s trying to do something – I always give ‘em tips on how they can be better.

It comes as no surprise that B. Magic pays it forward without hesitation. He named Malcolm X, Muhammad Ali and Tupac as major influences not just in his art, but also in life, citing their ‘knowledge of self’ as reason to be aware of what’s happening in the world and how global politics affect our communities.

The ViP: Could you tell us a little more about the Hood Hippies?

B. Magic: I look at it as a collective of artists, period. When I say artists, I’m not just talking about rappers and singers. I mean artists. Some people paint, some people do videos and more. My boys Caesar and Buddha have a video production company called Post Dreamz. They do music videos, but then they do [television] shows and stuff like that. They’ve got this show [I’m in] called Queen Pin that’s about to air. The quality is crazy and the plot is dope. It was the first time I’d actually been a part of something like that. I’m dabbling in acting now!

The ViP: What can we expect from B. Magic coming up?

B. Magic: [Last] July I dropped my first album, The Rough Draft. It’s an album about a rough time in my life – a part of my life that needed some revising, you know what I mean? I’m in the process of getting it remastered.

I’m working on ‘The Revision,’ which is part two to The Rough Draft, and I’m working on a blog site called The Concrete Garden. It’s gonna highlight a lot of the art that’s going on in different small cities. Because…I know a lot of people look over these small towns. Sometimes these small towns have the most talent. I’m kind of trying to shed light on that.

B. Magic has taken the risks of moving cross-country and following his creative muse full-time, all while working to help build a national community of artists. He’s created his music with candor and his career with tenacity. Just as important is his evolution in consciousness, leading him to place a radical education on the same pedestal as mainstream recognition.

The collective powers of the South and the East Coast conjured a worldly artist. He’s hungry to teach, to learn, to succeed in the game and change it for those coming next. If you’ve been paying attention, you know by now that he will. The only question is: how?

B. Magic and several members of The Hood Hippies collective currently reside in Lake Worth, Fla. You can check out his EP The Rough Draft on SoundCloud. 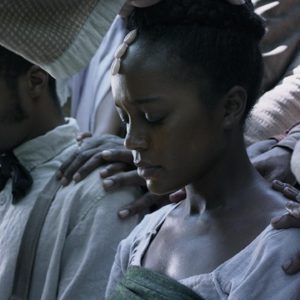 Surely you’ve heard about Nate Parker’s upcoming film, The Birth of A Nation. Since its Sundance debut and historical sale… April 16, 2016
...by TÆLORD•EXISTENCE. © 2016
Back to top