I’m a devout viewer of Scandal. I actually watched the first season live. No catch-ups for me! Yes, Me and Scandal have gone through the highs and the lows together. I was patient through the really choppy second season and even stuck with it through that horrific mess of a third season.

The show has been praised for being unique and innovative in so many ways—LGBTQ romantic representation, lead character of color, heart-pounding plots and the list goes on. Scandal has generally been able to hold its own against the tidal wave of criticisms about Liv’s sexual choices, her romantic decisions and her choice of white men as romantic partners. So it’s very odd to me that I’m getting faint Hotep vibes from one of the major plot points of the show—Liv’s and Rowan’s relationship.

The most recent episode ended with Rowan, aka Papa Pope bka The Trillest, disciplining Olivia for choosing her two white male suitors and, what she believed to be justice, over him. As he’s scolding Liv about how disappointed he is that she chose them over him, despite his earlier lengthy admission that he was a piss poor father, the team assembled to take down Papa Pope is being assassinated by B-613’s goons. If you missed the moment when it aired, let me sum up Rowan’s “farewell” speech for you:

“Dearest Olivia, I realize I was a suck-ass father and I have a 36-slide PowerPoint presentation prepared about all the ways I could’ve been a better father. All that aside, I must now traumatize you even further and discipline you in the harshest way I know how because you had the audacity to choose two white men each who, in his own way, has shown you more love than I ever have or ever will in this lifetime or the next. Since you missed the ‘choose your family, especially your black family, even when they’ve done nothing of value for you over white people’ meeting I will now emotionally and mentally scar and abuse you and blame all of these deaths that I have ordered on you.

P.S. Just reminding you, this is all your fault. “

….Or at least that’s what I heard.

Nope, ignore all of that because he’s fam and he’s black so that’s the team she should be pulling for. Since she chose a different side well she gets whatever comes to her. Oh ok then, that’s not a terrifying sentiment at all.

You mean to tell me that black people would prefer to see Liv stick with her father, despite him being the head of an assassin’s organization, than end up with one of her white suitors? Is this what happens when you date outside the race? You open yourself up to being vilified, abused and all-around disavowed from the black race? So black power and solidarity only applies when you’re dating someone within the race?

The ludicrous part of the whole final scene of the show is that Liv gets blamed for the entire thing. Papa Pope not only takes no responsibility for any of the lives he ended that night, but he reasons Olivia forced his hand in giving those commands by choosing “the bright white light” over him. That doesn’t sound like the words of an abuser, at all.

In no way do I believe that Fitz’s or Jake’s love is perfect or even significantly better than the love Rowan shows Olivia. There was that time Jake stalked her for several months. Then there was that time Fitz commissioned the stalking and the multiple times he’s pressured Liv into engaging him. So there’s that. I just don’t understand why Rowan’s abuse is acceptable because he’s her father and/or he’s black.

The notion of Liv needing some good black D is tired. Let the dream die Hotep twitter, let it die. It’s similar to when everybody wanted Liv with Senator “Good Guy” even though they had no real common interests or passions. People wanted to see her with a black man, despite her own happiness.

Did that just sound like a greater point about black male-female relations or am I tripping? Black women are not obligated to pick a black partner for the sake of “keeping up the race or keeping black love alive “ or whatever nonsense notion you’ve cooked up to keep black women tied to black men. Black women, throughout history, have shown their love and appreciation and support for black men. Even black women married to white men continue to fight for and stand behind black men in most cases.

Why do I have to feel like an outcast of the race just because I choose to partner with someone who is not black? In what part of solidarity and pan-whateverism do they say ‘we shall support said black woman now and forever more…unless she’s dating a white man, then she on her own.’

And that my dears is something I’m never here for. I hope Scandal gets it together though because I’m tired of seeing Olivia get abused and then blamed for her abuse from every which way on that show.

Came by to read your Kendrick Lamar story and now I’m glad someone said exactly what you said above. Even some well known and respected feminist scholars were on Twitter supporting her dad on both this episode and the next and it bothered me too. I want one of the guys to start treating her with full respect and her father to be decent and not guilt her. I also want us as a community to stop defending sexism and abuse for the litany of reasons we do. 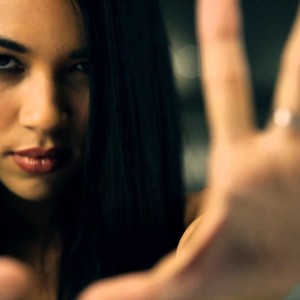 The only biopic more highly contested than Lifetime’s Aaliyah: The Princess of R &B is the Nina Simone film starring… November 16, 2014
...by TÆLORD•EXISTENCE. © 2016
Back to top