I should’ve known it was going to be a tough episode to get through when the first two minutes and 12 seconds was a hard-to-stomach Ichabod and Mrs. Crane love scene underscored by reality television, that ended with a look of exasperation from Katrina when Abbie finally interrupted and put us out of our misery. The audacity.

Laced with subtle sarcasm, one of Abbie’s first lines, “Sorry, is this a bad time?” quickly sets the tone and reminds me that Abbie has, in many ways, become the voice of the audience, more through Beharie’s performance and delivery of what’s written for her and less via the actual words.

Abbie’s growing frustrated and her patience is wearing thin, with Ichabod, with Katrina, with Hawley, Henry and everyone else that seems hellbent on deterring her from the mission to stop the apocalypse.

At this point Abbie seems to be the only one worried about saving the world. We can’t say for sure how Jenny or Irving feel at this point since we haven’t seen or heard from them in….yea. It’s been that long. During last night’s episode as we pulled into the homestretch of the train wreck that was, “Heartless.” Such a fitting title. 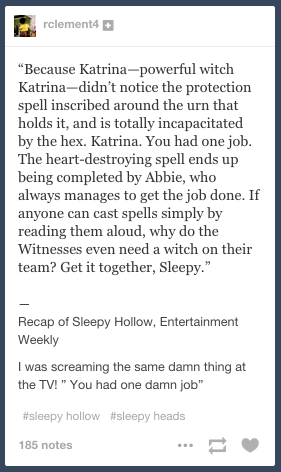 Sleepy Hollow isn’t working. There are major fundamental differences between the first and current seasons, the most obvious among them the shift in cast and characters. After the season opener the show went from color to grayscale almost instantly and hasn’t switched back since.

Season one included four different ethnicities, a decent balance in the gender department, a black girl in a wheel chair, a great plot, clever writing, and exceptional performances from the cast. This season has included, for the most part, white men treating Abbie Mills like crap.

The writers have been desperately trying to redeem Katrina but they’re a day late and a dollar short. If their intention was to introduce Hawley for the sole purpose of making him a creep, who objectifies and helps push Abbie (and her sister, Jenny) into the land of tropes they’ve succeeded there. Other than that he serves no purpose to the story line, the chemistry, or the show.

In a single episode Abbie managed to play more roles and fall into more tropes than she did all of season one.

If we haven’t been hoodwinked and episode nine is going to be some magical saving grace then we’ve been trolled for at least half a season by the showrunners and writers over at Sleepy Hollow. There are so many more problems with the current season and especially the last episode of Sleepy Hollow.

These are the questions that need answers: Is there hope for Sleepy Hollow or is it too late? What has to happen to save this sinking ship? If episode nine is all that we’re hoping it is, will it be enough? (I smell pacification coming.) Nicole Beharie is the only reason I’m still watching, why are you?

Read on. I’ll let the fans tell you some of the other problems Sleepy Hollow is currently drowning in.

Here’s to the demand for better color TV and a higher picture quality.

45 Minutes to Obsession: Teyana Taylor’s VII Brings Back the Best of the 90s [Album Review]

I’m SO GLAD I peeped this early and dogged Sleepy Hollow. I just had a feeling they were gonna sideline Abby. 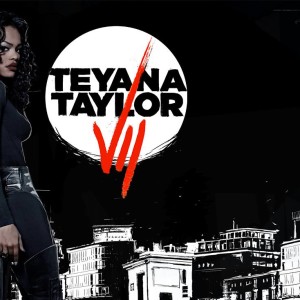 45 Minutes to Obsession: Teyana Taylor’s VII Brings Back the Best of the 90s [Album Review]

Flawless adj. Without any imperfections or defects. The last time I remember listening to an album that accurately fit this… November 11, 2014
...by TÆLORD•EXISTENCE. © 2016
Back to top