WARNING: Be mindful of your potential triggers related to misogynoirism, violence, and assault.

I clicked on the “Twitter” tab in my Chrome window. I was going to close the tab and retire from social media for the night when Teyonah Parris’ picture caught my eye. So close! I was so close to hitting that little red x when her first tweet made me pause and tilt my head. Part of me wishes I’d successfully gotten that tab closed.

On Monday night the Dear White People star gave, via Twitter, an account of an assault she experienced, at the hands of an older white man, while dining with friends. After I read that first tweet I knew the story wasn’t going to end well. I just didn’t know how bad it was going to get.

Folks have been casually assaulting Black women by petting, groping, grabbing, or otherwise touching without consent our hair, for as long as I remember being Black and then some. From curiosity to claimed admiration, rebuttal excuses have been thrown around for just as long. What far too many of these assaults have in common is an undertone that, regardless of what’s said, always sounds like “my bad; but calm down though-I didn’t mean…” With just a hint of victim-blaming, these incidents never fail to reveal the culprit’s misogynoirist underpinnings.

The white man in Parris’ account is simply walking in his truth: privilege and power, giving him the feeling of entitlement to act out his deep-seeded misogynoirist fetishizism. His daughter is clearly basking in and blinded by the same rays of privilege, power, entitlement, and no doubt, anti-blackness. Being Black and a woman is like nothing else and if Parris knows that like I believe she does, the daughter’s casual response and actions (or lack thereof) aren’t surprising to her either-at least not in retrospect.

Though they probably should be.

Your old ass, white dad just touched a young Black woman without her permission, continued the assault on her despite her verbal and visible resistance, and all you can say is ‘he’s trying to give you a compliment. C’mon dad.’?! Sounds like “my bad; but calm down though-I didn’t mean…” We talk about racism because racism still exists. We keep bringing up examples of sexism and misogny because they keep occurring. We call-out anti-blackness because we keep experiencing anti-blackness. Still, it is not enough to come to the conclusion that Black women, simply experience three times the amount of hate or are three levels lower in privilege than any white man (that would be enviably much simpler). Misogynoirism is a special strain of hate, one that can only be fully experienced as a Black woman.

These instances are often trivialized, even by us. The unofficial-but-kind-of-official, unspoken, “appropriate” response for someone touching our hair is made up of: 1. a look that would kill if only looks could (which buys you time to collect yourself from the shock and prepare for…) 2. a witty response, a respectable read that is as biting as it is informative and educational 3. being unfazed. At least that’s the memo I got at the last meeting.

The problem is I’ve yet to get it right. I’m not smooth like I imagine my Black sheroes (past + peers), would be and are in those situations. There’s usually stuttering, funny looks, and me, later, recounting the story to a friend with what I wish I would’ve said and, “I wasn’t ready.” Eventually we’ll laugh about it.

Every time my boundaries are crossed and my autonomy is threatened I’m reminded of the last time and the time before. Then, like the time before, I occupy my mind with the incident, wondering how to keep it from happening again. Eventually it’ll fade from the front of my memory-until I hear about another Black woman’s account of their latest misogynoirist-motivated assault.

Parris, star of 2014’s Indie hit, Dear White People, and Starz’ Survivor’s Remorse was open enough to share her account, which is important. Increasing and maintaining visibility on misogynoirism is critical; we can be too quick to dismiss and brush off these assaults (in the name of being strong or having “more important” things to worry about), become desensitised to them even. When that happens we head the wrong direction on the road to liberation and equity.

For me, it’s important to sit with the feelings that come with these accounts, even if it’s just for a moment; it reminds me of the work that needs to be done to end the perpetuation of these seemingly subtle, and highly nuanced assaults on Black women. Whenever I remember the vow I made to the CarefreeBlackGirl life, I remind myself there is no “right” response to the burden of misogynoirism in america and across the diaspora, and the sting is not one I should ever get used to-it’s one that I, nor Teyonah Parris or any other Black girl should ever experience. 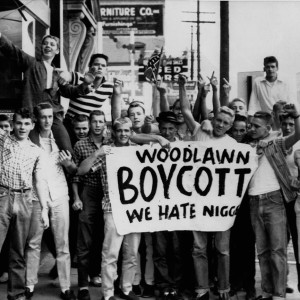 In 1960s america, integration seemed like the answer. Separate but equal wasn’t working–if we could just get access to the greener… June 9, 2015
...by TÆLORD•EXISTENCE. © 2016
Back to top