It goes without saying that if you’re a tennis fan, you already know and respect the greatness that is Serena Williams. There’s no way you can love the sport without living and breathing her every move on the court. Djokovic, Nadal, Federer, and Murray are affectionately, albeit annoyingly, dubbed the Big Four on the men’s side. But if you’re a new fan, or an oldie looking for some underdogs to cheer on, who should you tune into?

Here are six players to keep your eye on, all primed to be the next tennis great.

Madison Keys is by far my favorite tennis player after Serena. She turned pro in 2009 at the age of 14, but didn’t enter the top 50 until 2013 when she finished the season ranked no. 37. Last year, she caught my eye when she forced Maria Sharapova into a three set match at the Cincinnati Masters (anyone who frustrates Maria gets my attention though). In the 2015 Australian Open, we got to see a new dominant dimension in her game: the serve.

If Serena’s serve is the prototype, Madison’s is the second edition, with minor bugs. It’s just as powerful and lethal, but what Madison lacks that Serena has perfected is form, which makes her service game slightly inconsistent. That wasn’t a big deal in Melbourne though. She made it to the semi-finals, taking out top seeded players along the way, including Venus Williams.

If Madison’s game keeps improving, she’s sure to enter the top 10 by the end of this year and have multiple grand slam titles under her belt in the future.

NEW YORK, NY – AUGUST 26: Sloane Stephens of the United States reacts after a point against Mandy Minella of Luxembourg during their first round women’s singles match on Day One of the 2013 US Open at USTA Billie Jean King National Tennis Center on August 26, 2013 in the Flushing neighborhood of the Queens borough of New York City. (Photo by Elsa/Getty Images)

Sloane might be most remembered for being on the receiving end of one of Serena Williams’ infamous on-court outbursts during the 2013 Australian Open. Serena was coming off a 2012 season that saw her win Wimbledon, an Olympic gold, and the US Open in the final months. So imagine her surprise (read: anger) when Sloane sent her packing at the first grand slam of the year. I’d break my racket too.

Sloane eventually lost in the next round, but that match put her on the map as one of the up-and-coming tennis stars. Problem is, once she was on the map, she kept falling off and climbing back on again. After beating the champ, her performance in the “big” matches was shaky at best. Her inconsistency opened the door for critics (including me) to question whether her semi-final run in Australia was a fluke.

Consequently, her inconsistency is what makes Sloane a dangerous player. During any given match, at any given tournament, Sloane can be ON and when she is, her game is a beauty to watch. She is a pure athlete and her best offense is her defense. She’ll stay behind the baseline until she can set up a play then come to the net for a winner. Short of upsetting Serena again, I hope for great things from Sloane this year, including a return to the top 20.

I should preface this by saying that I don’t watch men’s tennis. Not often, anyway. As a fan of the sport, I can’t completely ignore the men and I love good tennis in general. Jo-Wilfried Tsonga plays good tennis. In terms of style, he’s a good mixture of the Williams sisters in that he has a big serve and a good offense at the baseline, and he’s also one of the better net players on the men’s side.

Tsonga hasn’t won a major grand slam yet, but he’s collected 11 ATP world titles since 2008 and they didn’t come cheap. He is one of the few players who have beaten each of the Big Four at least twice. He knows how to get it done; he just hasn’t been able to do it on the big stage. I think that may change soon, though. They don’t call him the “giant killer” for nothing.

Had this been 2001, I wouldn’t have to tell you to watch big sis, Venus Williams, because you’d look at me like I was being nonsensical. Even if you lived under a rock 15 years ago, chances are somebody peeked under it just to remind you that Venus was the best tennis player in the world.

In recent years though, people got a touch of amnesia and Venus Williams became an afterthought. This, in part, is due to her sister who completely took over the reins and outshined, well…everyone. But after battling injury and illness, Venus quietly made a comeback, her resurgence ignored until last year when the tennis world woke up and said, “Oh snap! You remember Venus? She can play too!” And man, is it a joy to watch her play.

I wish in 1999 and the early 2000s, I appreciated tennis more because I would have watched every single match Venus played. She is truly a master on the court, and I’m just in awe when I watch her now. Serena is strong, powerful, and beats her opponents into submission. It’s fun to watch and everyone expects it. Venus, on the other hand, plays with finesse and while she may not strong-arm her opponent, she makes them earn every single point. You don’t just beat Venus by being lucky. You have to have skill because she’ll run circles around you and you won’t even know it.

Even though Venus hasn’t won a grand slam since 2008, she picked up her 45th WTA title last year in Dubai. Before she retires, it’s not hard to believe that Venus can win another grand slam. Most people may have forgotten about her, but I haven’t and you shouldn’t either.

Gaël Monfils has to be the most exciting male tennis player to watch, hands down. If half of the men played with his energy and excitement on the court, I might be more into men’s tennis. As a junior, he won three of the four grand slams. Once he turned pro in 2004, he’s hasn’t had nearly as much success, reaching the semifinals just once in the 2008 French Open.

Regardless, the guy is fun to watch, mainly because of his ability to cover the court and the variety of ways he attains points (google search “Gaël Monfils, trick shots”…you’re welcome). His playing style is high-risk, high-reward, which hasn’t paid off for him yet but he has to break through sooner rather than later. Until then, you can enjoy this tidbit of his hilarious on-court antics.

You probably have no idea who Taylor Townsend is. She’s made it to the third round just once in any tournament. But trust me when I say that she’ll be a force to reckon with. Turning pro in 2012, Townsend is still learning the game and improving her skill. However, she’s shown flashes of greatness that, once harnessed, will be overwhelming for her opponents.

She’s not like most of the top women who rely on power hitting. She uses more variety, and likes to come to the net. Her volley is nowhere near the level of Venus or other great net players, but she wins more net points than she loses. If you aren’t into tennis at all, you should still root for her success.

As is the case in any pre-dominantly white sport, Townsend has already faced unnecessary criticism for something completely unrelated to her game: her weight. In 2012, while she was still a junior, the United States Tennis Association denied her a wild card spot in the main draw and refused to pay for her expenses, citing their concerns for her “long-term health and development.” In other words, “you don’t meet our standards of beauty so you don’t get to play.” Of course, the USTA standards of beauty are a little skinnier and a little whiter than Townsend. If you think the association’s decision had nothing to do with her race, you can ask Lindsay Davenport if anybody ever questioned her ability to play or was concerned for her health.

You’d think the tennis world would have learned by now. The last time they were “concerned” about Black women’s bodies, 15 years of women’s tennis were dominated by those same Black women. I swear, there are levels to irony. So, to recap: Taylor Townsend is a young tennis player with a different playing style, and she gets unwarranted criticism for her body image while her game goes largely unnoticed. Seems to me like she’s in great company.

What Kind Of Black Are You?: Celebrities and the “New Black” Mentality 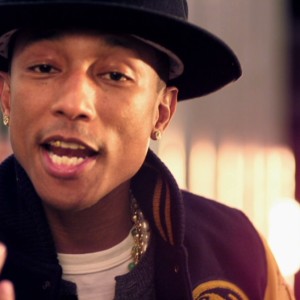 What Kind Of Black Are You?: Celebrities and the “New Black” Mentality

By now you’re probably familiar with the term “New Black” and its negative connotations. Producer Pharrell Williams… May 29, 2015
...by TÆLORD•EXISTENCE. © 2016
Back to top