We’re back with another must-read list! In case you missed our first installment, check it out. At the end of each month we’ll each be giving you a selection from our must read list. Expect lots and lots of amazing Black feminism.

As a PhD student with a year of my program under my belt *schmoneys* I must say my regular reading is overwhelmingly academic. Even my leisure reading was probably written by someone with a PhD in something…which would suck if there weren’t a bunch of awesome Black Feminist PhDs, who write books for other budding Black Feminists, like Melissa Harris-Perry.

Sister Citizen picks up where Black Feminist Thought left off. Harris-Perry incorporates the ever-present Mammy and Strongblackwoman tropes that are constantly trying to suck the life out of Black women and shows how they’re still being widely used in mainstream media (i.e The Help, any Tyler Perry movie, etc). She also addresses how the Black church though many times heralded as a place of strength and justice can very well simultaneously be oppressive and marginalizing for Black women. If you want more Black women using the academy to educate the youth and the lost you have to check this one out. 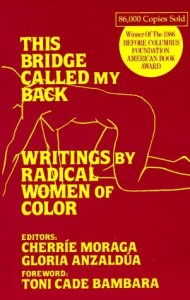 Jai Danielle: This Bridge Called My Back: Writings by Radical Women of Color edited by Cherrie Moroga and Gloria Anzaldua

I consider This Bridge Called My Back essential reading for every budding feminist. Published in 1981, this anthology features feminist essays, interviews, and poems by Audre Lorde, Toni Cade Bambara, Barbara Smith, and others.

Using the voices of prominent feminists of color, the book explores themes such as race, gender, sexuality, and class. This Bridge Called My Back is a great introduction to intersectional feminism and a call to all women of color to share their experiences. Anzaldua writes,

“Pen, I feel right at home in your ink doing a pirouette, stirring the cobwebs, leaving my signature on the windowpanes. Pen, how could I ever have feared you? You are quite housebroken but it’s your wildness I am in love with.”

Easily one of most important pieces of feminist literature I’ve ever read. 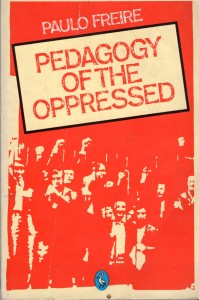 Carlyn: Pedagogy of the Oppressed by Paulo Freire

This book broadened my scope on oppression and taught me to rethink my definition of violence. It also reinforced the habit of power mapping circumstances of marginalized people – considering how power moves, relationships between power structures – corporate power vs. community power vs. individual, privilege-based power, etc.

A lot of the language was new for me, making it a challenging read (exactly what I was looking for). Paulo Freire was a phenomenal educator and thinker, and I intend to revisit his work annually. I recommend this book to everyone.

I read The Bluest Eye for the first time in 6th grade, and every few years I go back and reread it. Although the book isn’t very long, it is filled with layers of complicated characters and relationships.

I love how the story is told from so many perspectives, and how many “Easter eggs” of symbolism I find in what seem like the most confusing passages of text. Over the years I still think about a lot of the issues presented in this book, and how many of the characters’ struggles are caused by or made worse by the fact that they are Black, women, or marginalized in some other way.

In all, this is a brilliant piece of fiction that everyone should read.

KAMMs.: A Taste of Power by Elaine Brown

I’ve been on an auto-biography roll lately. Ever since reading Audre Lorde’s essay, “Learning from the 60’s” I think I’ve been on this sub-conscious warpath to “catch up,” refresh my memory and learn as much as possible as fast as possible about the missteps and triumphs of the freedom fighters before me-the dos and don’ts, warnings, unanswered questions, and the secrets they keep only in books and conversation.

So far I have three absolute favorite books, and Elaine Brown’s A Taste of Power is one of them because this auto-biographical manifesto is all of the above and then some.

This former head of the Black Panther Party is hated as much as she is loved, called a liar as fervently as she is claimed to be the truth on heels in black leather. Through much of the text I wondered if she was an empowered autonomous woman who did what she wanted with whom she wanted with her body and relationships or if her well-crafted words were a convenient and elegant spin on her journey up the ladder of power. Still, no other text has taught me as much about the Black Panther Party, the revolution of the 60s and 70s and what it means to be an imperfect Black woman feminist revolutionary. Elaine Brown is all of these things-unapologetically and with swank declaration. A Taste of Power is thick, but it’s worth the read; it helps that Brown is a hell of a writer.

What’s on your must-read list? If you had one book that someone has to have read to be your friend, what would it be? Let us know in the comments section.

What If We Were Free?: Riley Curry and Blackgirl Freedom 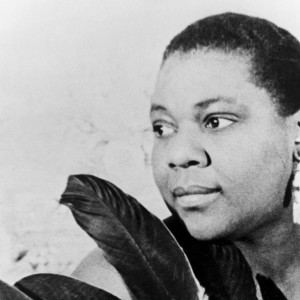