The 2015 WNBA Draft was held Thursday, April 16 and in the words of general manager Penny Toler, “It was a great night for the Sparks.”

The Sparks had the 7th, 14th and 31st picks, and with each selection, another strong talent was added to the roster.

First up, the Sparks selected Crystal Bradford out of Central Michigan. The 6-0 guard finished her four-year career ranked atop the school’s record books in four categories: scoring (2,006) rebounding (1,140), made field goals (805) and blocked shots (177). She is the only player in school history to score 2,000 career points.

A 6-2 forward from the University of Tennessee, Cierra Burdick, was selected as the Sparks second round draft pick (14th overall). Burdick averaged 8.1 points, 6.2 rebounds and 1.8 assists in 132 career games at Tennessee. As a senior, she was the Lady Vols leader in total assists (91), second-leading rebounder (7.6 rpg) and third leading scorer (11.0 ppg).

As the 31st overall pick in the WNBA Draft, Andrea Hoover played collegiate ball at University of Dayton. The 5-9 guard finished her Flyers career averaging 14.6 points, 5.6 rebounds and 2.7 assists in 127 games played. Dayton’s all-time leader in career made three pointers (239) and three-point percentage (.398), she also ranks fourth all-time in points.

I Want Great Things for Nicole Beharie, Sleepy Hollow Isn’t One of Them 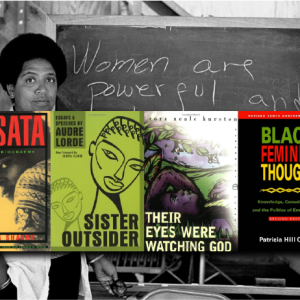 We here at The Visibility Project like our books. We like our essays and we love our Black Feminists and other Revolutionaries… April 29, 2015
...by TÆLORD•EXISTENCE. © 2016
Back to top