Never Forget #004: Eartha Kitt Made Lady Bird Johnson Cry…And Got Blackballed for It

Everyone knows Eartha Kitt for her famous Christmas classic “Santa Baby,” her unapologetic sex appeal and her phenomenal performing skills.  Yet few know that decades before she was the hilarious villain, Yzma, from The Emperor’s New Groove, she was blackballed for lowkey reading the First Lady of the United States, Lady Bird Johnson, for filth. In 1968, Kitt was asked how we [read: middle to upper class white women] can fix the problem of juvenile delinquency in the U.S. [read: how can we get the youth to act right without actually fixing any systemic issues but  still feeling better about ourselves].

To which Madame Kitt replied:

“You send the best of this country off to be shot and maimed. They rebel in the street. They will take pot and they will get high. They don’t want to go to school because they’re going to be snatched off from their mothers to be shot in Vietnam.”

And then she followed it up with this:

“Vietnam is the main reason we are having trouble with the youth of America. It is a war without explanation or reason.”

This statement, though brief, was revolutionary due to the time and the place where it was said. Kitt didn’t just say this in an interview or in a strongly worded letter to the White House. She said them TO THE FIRST LADY’S FACE.

And where do you fancy she said them? IN THE WHITE HOUSE, in front of the President of the United States and a bunch of white women. Even after the luncheon was over and the news spread like wildfire that Kitt had “made the First Lady cry,” the pinnacle of class and grace that was Madame Eartha was not sorry.

So as you can guess, the powers that be were pissed and proceeded to blacklist her in the U.S. She received personal threats from the CIA at the behest of President and Lady Bird Johnson and was unable to receive steady work in the U.S. for almost a decade.

Fortunately for all of us, Kitt was able to continue her career in Europe and proceeded to remain in touch with various activists across the world. She was eventually welcomed back into the American mainstream and was able to re-establish her career, but there’s something to be said for having your career almost singlehandedly destroyed by the U.S. Government simply for speaking your mind.

#001:Lincoln Never Loved Us #002: COINTELPRO #003:Everything that Adolf Hitler Did in Germany Was Legal

Never Forget #003: Everything that Adolf Hitler Did in Germany was Legal

Never Forget #005: Sojourner Truth Was One of the First Black Feminists

I think the bottom line was that America loved Lady Bird! You don’t inspire much warmth from the public by yelling at someone who the public loves. By the way, Eartha Kitt did do some talk show appearances during her “Blacklist” period.

The activism in the streets of Dr. King and many other activists were the catalyst for the signing of the Civil Rights and Voting Rights Act.

I never heard this story. I gotta go to the library and check this out. I want to see tears flowing down Lady Birds face since her feelings were so pinched. Sounds like she was a rather over-dramatic woman. I mean its not like Madame Kitt slapped her ass like Cookie slapped Boo Boo Kitty.

Tricia, First off the CIA did everything they could to destroy her career per LBJ. They harmed her in that way. She embarrassed him and his wife in front of their uppity friends and the entire world. She was a threat to them by just her educated mind and very necessary questions. I guess she was invited to the White House to sit pretty and nod her head. Speaking up as a person of color has always been a problem in this country. Somethings NEVER change.

Ah, Hanoi Jane and The Smothers Bros. (Dick and Tommy) — we’re WHITE! I’m 54 and remember those days well. Even then “white privilege” had its benefits. They didn’t have to leave the country to find work. What about Harry Balafonte. He was hardly for the War, but he wasn’t Blackballed! Again, sometimes it’s how you say something more than what you say. So few people in entertainment were for the war that it’s ridiculous to assume one would lose much work for being against it. Martha Raye lost work for being FOR the War!(Though in her case it was also how she said, more than what.)

Yeah Martha Raye performed for us in Ft.Campbell,Ky while we were in the field preparing for Vietnam in 1965, and so did Eddie Floyd do you remember (Knock on Wood?)

My mother just told me about this today she remembered it in the 1960’s, Everything thing she said was accurate to this article, I had to look it up on line and read about it. WOW

I am learning so much that school never taught me. I have always been a reader/researcher, and I will be one until I die. While I continue to research, I absolutely love it when people who lived it, tell. Thanks for sharing that your mim remembers this.

This is always the case when you TELL THE TRUTH. Even the clowns in the White House at that time needed a wake up call. President Kennedy did not want us to fight in the Vietnam War…hence…he was shot in the state where Johnson was from, Johnson took over and had us waged in war that we had NO business fighting. It was a SETUP. Eartha Kitt hurt the first Lady’s feelings??? BOO HOO…she told the TRUTH!!!

Kennedy DID want us to fight in Vietnam! He was NEVER going to withdraw! It’s wishful thinking. He was killed by a COMMUNIST because he was a hawk. When will people realize that Oliver Stone’s JFK was a MOVIE!

not going to war would not benefit the Military Industrial Complex. The more it escalated the more they make. When we give money to a foreign countries, they send it to these people, then send weapons, that is how Israel got their military. We sent Saddam weapons when he was at war with Iran. Whatever benefits the Corporations, Halliburton has move their head quarters to Dubai. They pay no taxes, and are the largest contractor to the US Military. They were paying guys to drive empty truck from one base to another and back empty and charged the government and where over billing for lots of it too. Until you get these old white men out of congress, it will not change.

I’m wondering who wrote this first off? Next I’m wondering where you got this information from and if you can provide any resources or primary documentation?

Remember this was the family who passed civil rights legislation.

It was how Kitt said these things more than what she said. NO other showbiz figure was “Blacklisted” for opposing the Vietnam War. Not even Jane Fonda. Even the Smothers Brothers still got work after CBS cancelled their show.

Ah, Hanoi Jane and The Smothers Bros. (Dick and Tommy) — we’re WHITE! I’m 54 and remember those days well. Even then “white privilege” had its benefits. They didn’t have to leave the country to find work.

But they was white!! And she was a black lady!!! It’s NOT how she said it! It was were it was coming from! A Black lady mouth! And I guess you will say there was no racism back then too!

Just because they did one right thing doesn’t mean they were entirely moral. Johnson was still a southern man who used the word nigger to describe black people and the Vietnam war was more about ego (MY war is not imperfect) than it was about right or wrong.

Oh poor, poor Lady Bird. Such a delicate flower. How harsh the winds of reality must be to such a coddled, oblivious phony.

This is a lesson the Dixie Chicks learned many years later. And, through the Maines brothers and their family, the Chicks have strong roots in mild protest music. It was the spoken word that got them in trouble.

Don’t alienate you core audience! Notice that non-country performers got away with saying the same things!

I’m embarrassed to say I have never heard this story before today. What an amazingly brave person.

If I had been Ms. Kitt I would have been black balled too! I often see that you are required to have a certain level of education for a career/well-paying job and a squeaky clean/honest background. Yet, you are expected to dummy up or dummy down when asked an honest logical question? You are expected to give the “political correct” answer. Maybe this is one reason why I am not in favor by many.

First time I have heard this story. Brava Madame Kitt! On another note, we seriously have to come up with alternative words to describe negative experiences that do not include “Black” Blacklisted should really be replaced with “Whited out” because that is far more accurate and does not center Blackness as a negative.

Wow! Impressive! I had no idea. She was definitely ahead of her time 🙂

Ms. Kitt was NOT ahead of her time. She was spot on and with perfect timing. The United States and it’s Administration was (is) behind the times. Not a lot of people know this incident because it was “whited-out”. Thank you for the colloquialism, Mia Imani.

This “incident” was ‘whited out’?? How as asinine you are. I was a small child, and this was international news. There is a time and place for everything, and obviously for miss kitt, her career was at a standstill. There was one sure way to get in the papers. Had the CIA, CID & FBI wanted to “harm” her, it would not have been too hard. JFK had been murdered, a B TV star would have been nothing. 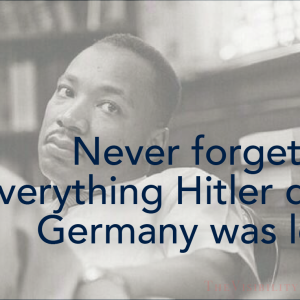 Never Forget #003: Everything that Adolf Hitler Did in Germany was Legal

You’ve likely heard or read this phrase before, especially if you’ve read Dr. King’s letter from Birmingham jail. Still,… April 8, 2015
...by TÆLORD•EXISTENCE. © 2016
Back to top