I walk to the mailbox in a small town about an hour outside New York City: Slowly, I make my way down our cracked driveway. I marvel at the blades of grass; so soft and fragile yet they’ve managed to disrupt the concrete and find their sun. I fancy myself this strong when I observe the blades, my nine years of life have not taught me better, yet. In the mailbox is a letter. “To the Indians,” it says on the front in a child’s scrawl. No envelope, no return address. Just a hastily folded piece of wide-ruled notebook paper. Inside, a drawing in brown crayon, of a teepee, and stick-figures with feathers on their heads and spears in their hands. Underneath the drawing the words: “GO HOME.”

More than a matter of simple enfranchisement, citizenship for the non-white immigrant is often a matter of existential importance, belonging, and security. Not that having papers inoculates brown and black bodies against unfair treatment. This complicated relationship to citizenship is particularly relevant in this moment when city streets and small town squares are pulsing with marchers raging and staging die-ins. Protestors against police brutality are asserting that Black Lives Matter. On social media, a conversation started many months ago, using the hashtag #BlackLivesMatter, continues on in earnest with no sign of abating. Where do I locate my brown body in this mix? My South Asian American community? What do we have at stake if we choose not to stand up in the face of institutionalized anti-black racism?

Our very humanity is tied up in our ability to be seen as human beings, first and foremost. As we know, this is a country founded and sustained by the logic of slavery. This logic, infused in all American institutions from judicial to economic, creates a world in which black people are seen as property, capitalism thrives, colonization is civilization, the prisons boom and teem with black bodies at once disenfranchised and working for free. This logic allows us to create a racialized social structure in which black people are dehumanized and treated like property, and the Native and First Nations people of North America are erased, facing an ongoing genocide. This logic foments a history that tells us that Europeans are the true owners of this land. Asserting that ‘Black Lives Matter’ disrupts this logic. And for those of us non-black people of color, asserting it out loud in public spaces and in private ones means that we must see our place in that structure and challenge it, consciously and willingly.

Also at stake here, is our ability to be seen as human beings worthy of agency in the form of citizenship. This, of course, is a hot topic for a country in the throes of a demographic shift, and a subsequent resurgenceof white nationalism. For many of us, the lure of the model minority myth is strong. But let’s not forget the history of this myth: it arose as direct backlash to the Civil Rights Movement, designed to isolate our communities from each other. As social programs and affirmative action policies made their way through Congress, many Asian Americans went from being depicted in the media as conniving foreigners to sparkling model minorities, they kind who didn’t need government handouts to succeed. The myth is rooted in racist logic aimed at isolating Black people and allowing an attack on social programs that purportedly encourage them to stay dependent on the state, when facts show us a much more complicated picture about who uses social programs, why and how often. To this day, conservatives cite this myth as reason to dismantle security net structures, social programs for low-income people and civil rights policies. See, if some people of color can “make it” in America, then the American Dream cannot be a lie.

The myth of the model minority is strong. It enraptures many of us with pats on the back, encourages us with social mobility, and seduces us with the promise of an unquestioned right to belong. It offers us a pathway to citizenship, literal and psychic. It makes these promises in secret, like a whisper, and if we believe them we can close our eyes for a moment and forget what it took to get here. 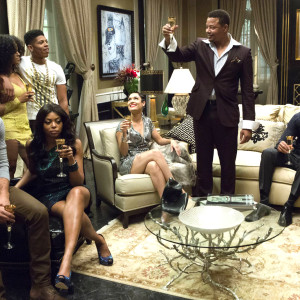 After a very good debut on January 7, the Lee Daniels and Danny Strong created series just had a pretty great rest of the week…. January 13, 2015
...by TÆLORD•EXISTENCE. © 2016
Back to top