“Well they just don’t give a damn.”

That was the first thought that popped into my head once I read the title “The Comedy Comedy Festival: A Comedy Festival (CCF).” I chuckled and knew that whoever was in charge of this event was a kindred spirit (or a group of kindred spirits), someone who understood that sometimes you don’t need to be clever or fancy to let the patriarchy know you don’t give a damn about its limitations…sometimes you just have to troll the fuck out of them because you can.

When asked how the name came about, festival co-producer and The ViP fave, Naomi Ko, responded, “this is the ultimate trolling on the part of Jenny Yang and us encouraging her [to] keep on trolling.” It was from this moment on that I realized I was correct, the people in charge of The Comedy Comedy Festival were kindred spirits.

Well there you have it. The icing on top of the delicious cake that is CCF: the festival was put together, organized and funded by the members of the production committee and local businesses who agreed to offer their time and resources. Comedy Comedy Fest is “truly and indie festival, it’s truly independent.”

I was sold once I heard Naomi Ko was involved and even before I knew the details of the event or had a copy of the schedule I already believed in my heart of hearts it is going to be the livest event of this upcoming weekend.

Just as her character in Dear White People was fully prepared to squad up with her fellow Blacks to crash the racist ass party happening on campus, Ko has been no stranger to speaking against police brutality and other injustices affecting Black communities. She is one of the true shining examples of what it means to be an ally…and she’s also funny as hell! Ko has not only been a great advocate for Asian Americans in comedy but also openly vocal against all types of injustice not just those that impact Americans of Asian descent.

Speaking with her, even for the brief period of time we were on the phone, was hilarious. When speaking about whites in comedy and why this festival is important, not just for Asian-Americans but for every one who wants to come she notes, “we want all people, not just Asian Americans, all people to come to the fest and [just] have a great time but obviously we can’t do that, we’re not White. There’s always that kind of political edge and that kind of call for representation and doing representation right. For us, we want people to be entertained…we want them to be happy but also it’s…because we’re color folk, we have to think about these political issues we have to think about societal woes. We can’t forget those…we still have to address issues of race, of gender, of religion, of sexuality on stage and we will and we’re okay with it. I just would like to point out white people don’t have to do that.”

As we kept stating last year when we profiled her for The SoapBox Series, Ko is not afraid to speak her mind. Her passion for making people laugh while also “pushing an agenda” is tangible even over the phone. “There is a stigma, especially now with the awful police brutality stuff happening to the black community. I think there is a stigma in our society that you can’t use art and be purposeful at the same time. Like Nina Simone is the epitome of merging those two together…there’s a stigma developing, especially in entertainment that you can’t entertain while making a point…or if you’re going to do that, you can only be Jon Stewart.”

Now I don’t know about you but I love me some good times with a purpose and that’s exactly what Ko assures The Comedy Comedy Fest is going to be: an unapologetic homage to the experiences of Asian Americans that also makes you laugh. Ko herself is looking forward to one particular event on the schedule—The Cherry Poppins Show. She’s happy the Comedy Comedy Fest is able to “provide a safe space, we gotta provide a safe space where you can make that joke without a white person being there to reaffirm you.”

As the website says, “The Comedy Comedy Festival: A Comedy Festival” is the new comedy festival happening over the course of four days throughout the Little Tokyo, Arts District and Echo Park neighborhoods of Los Angeles. The festival runs from Thursday, August 27th, 2015 through Sunday, August 30th, 2015 featuring four days of standup comedy, improvisational comedy, sketch comedy, scripted comedy, creative empowerment and comedy workshops, comedic storytelling, mixers and after parties. The festival is the first ­of­ its­ kind that brings together the independent comedy performers and the YouTube community to showcase their talents and build the live comedy­-going audience in the Asian American community.” After speaking with activist, writer, comedian Naomi Ko and others involved in this project, it sounds like it’s going to be all that’s mentioned above and so much more.

I don’t know about you but it seems to me that there’s really only one place to be this weekend, The Comedy Comedy Festival in Los Angeles. 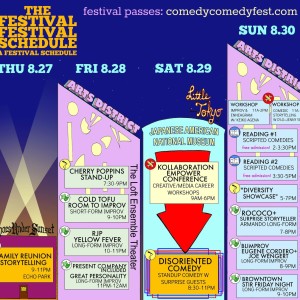 Hey friends! So I know we’ve been yapping about ‘The Comedy Comedy Fest: A Comedy Festival’ for the past few weeks now but great… August 25, 2015
...by TÆLORD•EXISTENCE. © 2016
Back to top