“Are you ticklish?,” he placed his hand on my back.

“Excuse me?,” I glanced back in surprise and confusion then up at his face trying to simultaneously confirm this unfamiliar man was touching me and asking me what I thought he was asking.

“Are you ticklish?,” he repeated, with a sly grin.

Reflexively, slowly I lowered my right shoulder in a vain attempt to politely end the growing unease I was feeling.

I glanced at MOMMs in front of me, wondering if she could hear the exchange. I hesitated before responding.

‘If I tell him the truth, that I’m extremely ticklish, will he try to tickle me? If I lie and say I’m not will he try anyway, like guys do when they’re flirting with girls on the school yard? Why in the world does he want to know if I’m ticklish in the first place?? If MOMMs can hear me is she going to think I’m being anti-social or rude or my typical introverted self (all lifelong thorns in my well-intentioned, extroverted mother’s side)?

Would she blame me for how I felt? Claim I was over-reacting? How is my response going to reflect on my parents-being rude to a fellow member of their congregation? Do I feel like being the Angry Black Woman today? The miseducated, ill-raised youth who disrespects her elders? Wait. I’m grown-does he know how old I am?!‘

Finally, cautiously I offered, “Uhm. No?”

I didn’t consult a mirror but I know my face pretty well. The transparency of my thoughts is typically made possible by the sheer expressiveness of my face. A blank canvas for anything and almost everything in my head, my facial expressions have betrayed me more times than I care to admit or recall.

As sure as New Orleans is barely breathable in August the look of horror and disgust I was displaying told this strange man everything I was feeling-and still his hand remained on my back, his grin, though slightly more demure, remained plastered across his face.

“I’m just trying to figure out what I gotta do to finally get you to smile for me.“

I felt lava in my twisted gut. My already tensed body finally shook free from his touch as I scoffed, rolled my eyes, started breathing again and proceeded to ignore this man I’d never met. I looked ahead, more than ready to finally exit our row and make my way down the aisle behind my parents to join the tithes and offering procession.

When I finally figured out what he wanted, or at least what he said he wanted, I felt an odd sense of relief-and that’s the worst part about all of this.

Before then the primary feeling I was experiencing was fear. There was a strange older man, a man I’d never laid eyes on, touching me without permission. The man, who appeared to be in his 50s, apparently sat behind me during the already sufferable and triggering service I’d endured (I swear if I hear “Black-on-Black crime” and “pull up your pants” one more time…) at my childhood church-the church my parents still attend. How he knew whether or not I’d smiled during the service I’m not sure, but wondering made the entire situation creepier. Had he been watching me for the last two hours?

After relief, frustration and anger set in.

It took everything in me, including the Holy Spirit, to refrain from reading this man his rights and the unwritten constitution of Black feminism.

Being the freedom fighting Black feminist that I am my mind quickly went to Tatyana Fazlalizadeh’s Stop Telling Women to Smile campaign. ‘I need a pocket size version to handout to fools like this,’ I thought to myself. 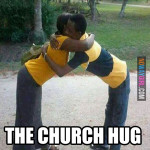 As I made my way out of the church I was stopped by familiar faces for greetings and hugs-some taken and some I offered-all people that watched me grow up in some capacity. I’m not a hugger. I don’t generally like them. Partly because I’m just under 5′ 2″, placing my face in the chest/stomach area of most men and if I’m lucky the neck area of most women in heels. For this reason and others (including the fact that I don’t know where you’ve been, how clean your house, car, etc. is, or if you have pets) hugging people I’m not typically affectionate with is just not something I’m a fan of. Still, I do it because Black.

It’s a cultural thing. I get it. Most Black people are huggers. All Black church-goers are huggers, cheek-kissers [see GIF] and touchy feely and if you’re not, typically you make the temporary adjustments for any number of reasons, not the least of which is to avoid being considered anti-social, stuck-up, stand-offish, or some form of a heathen.

Moreover, his thoughts, actions, and behaviors were misogynistic, ageist and some might say pedophilic. Those that don’t know me have a hard time believing I’ve graduated from college already. In fact, as I marched through the streets of New Orleans on my graduation day, donning my cap and holding my degree, more than one person told me congrats and then asked if I was going to college next year. Each time it took co-signs from my parents before the shocked antics simmered down.

As creepy as it is, let’s just ignore the age thing for now.

I just want to know if I can have my face back.

Why is it that older folks and men (no peers and only much older women have ever attempted to assume temporary control over my face at will) feel they have a right to my face? My face and my body are mine and mine alone, what I do with both is mine alone to decide. No more than I’m willing to dance on cue for modern-day minstrelsy am I willing to smile on demand for anyone other than myself.

Making unwelcome demands of others is harassment. Touching others without permission is battery. And threatening someone-implied or otherwise, even while displaying the grin of a Cheshire cat-with battery in an effort to have your demands met is a form of violence.

If my lack of a smile, pensive demeanor, or as some call it Resting Bitch Face and/or my rejection of your request or demand is anything other than OK with you, you need more than Jesus. Some of those needs include a therapist, a dose of reality, your privilege checked, a visit to Tatyana Fazlalizadeh’s site (post-haste), a viewing of this video by Staceyann Chin and Zuri, and Audre Lorde’s, bell hooks’, Angela Davis’, (to name a few) complete anthologies.

Then you need to hop on Twitter, find and follow the revolutionaries listed here. It’s likely you’ll encounter Hotepville somewhere on your journey. Stay mindful and don’t get fooled-this is an alluring detour that many revolutionaries get trapped in. If you see too many pyramids, ankhs, or start hearing spoken word poems that all sound the same and begin &/or end with Peace God/Peace Queen, stop and ask for directions immediately!

The best thing that came out of this situation was a great idea-one I plan to execute this week and one that will affect every individual who impedes on the autonomy of my face from here on out. Until then and perhaps even after, all violators will be met with a swift, “NOT TODAY, SATAN!”

In retrospect and all things considered, I’m still not sure if I should’ve or would’ve handled the situation any differently. Perhaps I could’ve tracked the man down after church and explained his inappropriateness. But is that really my job? My responsibility?

Certainly there’s a time and a place for everything, and different circumstances call for different responses. One thing I know for sure is that no one, regardless of the circumstances should be made to feel uncomfortable and worse, afraid or hesitant to speak up once the discomfort or violation has occurred.

We all need to be more mindful of the necessity and importance of asking for permission and getting consent, even when our intentions are pure. This is vital to respecting the autonomy of others, even those of children, family members, and fellow members of a church congregation, and a great way to prevent yourself from crossing the boundaries of others.

*Please note that though humor has been sprinkled throughout the end of this piece, it’s a very serious situation, one that is triggering for many, including myself and one I don’t take lightly. 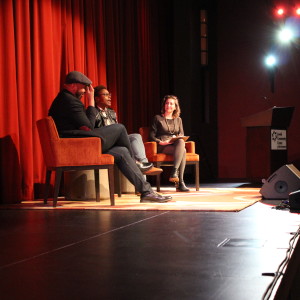 Four minutes into one of the most hilarious public conversations I’ve ever witnessed I thought to myself, “Shit! I should’ve… February 22, 2015
...by TÆLORD•EXISTENCE. © 2016
Back to top