When Passion and Purpose Meet, Tie it with a Beaux

When passion and purpose meet, tie it with a Beaux

Anyone who knows any thing about fashion (and even some of us who can barely tell the difference between cheetah and leopard print) knows that it is all about the details and something as seemingly minor as earrings or a cuff link can potentially make or break an outfit.

Sir Vincent founded in 2012 by 23-year old New Orleans (NOLA/Neauxla) native, Sherard Briscoe focuses on enhancing clients’ personal style through neckwear. His love for the city that raised him shines through in the Creole branding of his “Beaux” ties. (The –eaux is pronounce “oh.”) Briscoe is very intentional about the culture and fabric of New Orleans being a part of his company’s brand and that no matter where his ties end up in the world, the client knows that his or her Beaux was influenced by, manufactured in and shipped from New Orleans, Louisiana.

Briscoe’s ties, like the city of New Orleans, are in fact one of a kind and have their own special flare that make those around you stop and take notice. It may be hard to place what you love about his beaux ties or what about the design drew your eyes to the compact piece of neckwear, but one thing you are sure of is that you’ve never seen it anywhere else.

With baby beauxs, unisex beauxs and custom beauxs available, Sherard Briscoe has made it his company’s mission to let everyone know that there is a beaux tie for you. Briscoe looks to dispel the myth that beaux ties are only appropriate for formal events, such as weddings or balls, and show consumers that you can wear a tie anywhere, anytime and for any reason.

When speaking about the importance of the beaux tie and how it accentuates one’s outfit, Brisoce notes that it is the visibility of the tie and the proximity of the neckwear to the wearer’s face that makes the item the centerpiece of the outfit.

Although you may think a beaux tie is merely an accessory that comes last in the piecing together of an outfit, Brisoce begs to differ. His approach to building looks is to pick the beaux first and coordinate the outfit to match the tie. This approach to style-building may seem unorthodox, but it has worked for Brisoce and his now flourishing beaux tie business.

It is very easy to tell that Sir Vincent, at its core, is simply about the little moments and the small touches that pull everything together. Recently commissioned to provide the neckwear for two wedding parties, Briscoe acknowledged the honor and pride he took in being able to be a part of those special moments for clients.

It may seem that Sir Vincent is the perfect fit for people who want to keep their beaux tie game at a 10, but what about those who are less skilled in the beaux-wearing department?

Briscoe assures that there is nothing standing between you and beaux tie excellence…except for pre-tied beauxs that is. “I’m just not a fan,” admits Briscoe. Sir Vincent’s brand manager, KAMMs, echoes the sentiment. “No matter how much you wear ties – I’ve been wearing ties since 6th grade – you’ll never tie your beaux the same way twice,” says KAMMs. She adds, “Different fabrics and cuts lay and tie different when you tie them by hand.  Pre-tied beauxs look the same every time. It’s the tiny nuances in self-tie beauxs that add to the look.”

The beaux tie entrepreneur encourages consumers to not let the tying of the beaux intimidate you. There are videos and more videos that can help guide you and keeping the client in mind as always, Briscoe provides clients with a handy guide directly on the back of his business card, which comes with your package.

Of course, there’s no way to address Sir Vincent without addressing the work it took to make the company what it is today.

Sir Vincent fell right into the lap of Briscoe who feels that starting the business was “super easy” even if the skill of making professional beaux ties was not. He recently found the first beaux tie he crafted and recalls that it took him over 6 hours to make this first beaux. It was after several trials and flawed designs that Briscoe finally perfected his beaux tie and only after people bought the ties right off his neck did he consider starting a beaux tie business.

While starting the business may have been easy, the transition from beaux tie designer to beaux tie business owner proved a bit more difficult. The rapid growth of the company in such a short time, forced Briscoe to learn the ropes of running and promoting a business at an accelerated pace. He’s made his share of “rookie mistakes” in his tenure as the head of Sir Vincent but at the end of the day “it’s been a fun ride.”

Since he now has networking at The Grammy’s and being featured on New Orleans’ The 504 to add to his resume, Briscoe can share some of the knowledge he’s gained with those who are looking to start their own business, whether it be in fashion or any other market:

Brisoce’s own trajectory over the last two years serves as an inspiration to anyone contemplating starting their own business or following their dream. The risk involved in starting one’s own business is no small feat but, as the young entrepreneur can attest to, if you push forward and ask for help things will start to move.

Recently, Sir Vincent’s brand manager negotiated an endorsement deal with rising playmaker, Lena Waithe, executive producer of the upcoming film, Dear White People, staff writer on the Fox series, Bones and writer and creator of the upcoming series, Twenties, which is backed by Queen Latifah’s Flavor Unit. Waithe, who has a unique fashion all her own, is a perfect embodiment of the notion that beaux ties can be adorned anywhere, anytime and for any reason.

Sir Vincent Beauxs paired with heels are perfect for those who want to maintain a certain femininity while wearing a beaux tie.

Contrary to the common ideas about the cutthroat nature of the fashion industry, Briscoe emphasizes that it is not his goal to be the sole provider of beaux ties in New Orleans. He and other New Orleans fashion designers, welcomes other designers to the local industry in hopes of expanding the New Orleans necktie and fashion business; basically, the more the merrier.

Briscoe makes it a point to acknowledge that he did not garner this much success on his own. It was his social network, peers and the mentorship of one designer in particular, Micaiah Bethune, founder of The Wild Life Reserve of New Orleans, that has helped him put Sir Vincent on the path to becoming a household name in neckwear.

This humility and connectedness to the roots of his story—his birthplace, his first tie crafted and his first tie sold—flowed throughout the interview and impressed upon me that at the center of his business is a desire to help others. Whether it be by finishing off their outfit or encouraging them to pursue their own dreams, Briscoe exudes a willingness to make some one else’s life better if only by adding the smallest touch of exceptionality to their look.

Sir Vincent Designs can be purchased online at SirVincentDesigns.com

Candace Parker & the Sparks vs. Brittney Griner & the Mercury: A Prime Example of why we need the WNBA

Thank you for taking the time to feature Sir Vincent on The Visibility Project! It was a pleasure to chat with you about my company and glad to say that you have been apart of its growth with this well-written article! Thanks again!

Bri! I think you did a great job of capturing the essence of Sir Vincent. NICE! :0) 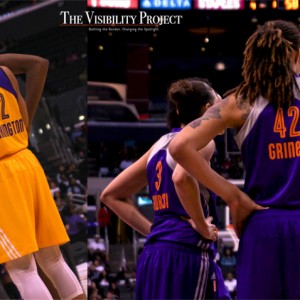 Candace Parker & the Sparks vs. Brittney Griner & the Mercury: A Prime Example of why we need the WNBA

Entering the Staples Center Sunday afternoon as I took my place along the baseline, camera in hand, it wasn’t clear what… May 19, 2014
...by TÆLORD•EXISTENCE. © 2016
Back to top